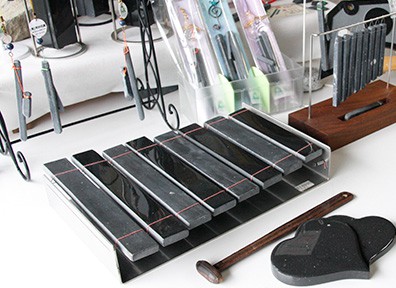 A stone that makes a "kern, kern" sound when struck. Sanuki's famous stone "Sanukite", which has been called "Kan Kan Stone" since ancient times. This black stone (andesite) was formed about 1,500 million years ago when lava from a volcano hardened. It was mainly used as a blade material until the Yayoi period (about 2,000 years ago), when iron was introduced to Japan. The name Sanukite was given by the famous German geologist Weinschenk, who visited Kagawa Prefecture in 1891 to investigate. The name Sanukite was widely introduced to the world. The best thing about sanukites is their sound. The pleasant sound that sanukites make has been used in many different places since ancient times. It was generally used as a signal to announce a visit by hanging it at the entrance, reception room or tea room. It is also famous as the world's only "music instrument of stone" including a stone xylophone that can play two octaves. Recently, there is a movement to utilize the pleasant sound of sanukite itself as a music therapy, and the effect is drawing attention.