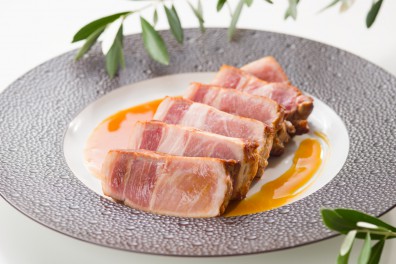 Olives from Kagawa Prefecture have a history of more than 100 years of cultivation, and have been carefully grown by hand-picking. "olive""oliveBoth are livestock products grown by mixing olives with feed, but "Olive Dream Pigs" are Sanuki Yume Pigs, which were developed based on the Berkshire breed in the UK, which is said to have good meat quality. A brand born from pigs produced in Kagawa Prefecture. Olives produced in Kagawa Prefecture contain many antioxidants such as oleic acid, which is said to be useful for preventing and improving lifestyle-related diseases, and polyphenol, which is said to be useful for preventing cancer. Heating and drying the fruits after oiling the olives gives them a feed, which changes the meat quality, melts sweetly in the mouth, and gives a light taste. The quality of the meat grown healthy with the power of olives can be enjoyed with a unique taste that is different from conventional pork.